Posted at 15:02h in BlogJams by Ben Upham
Share 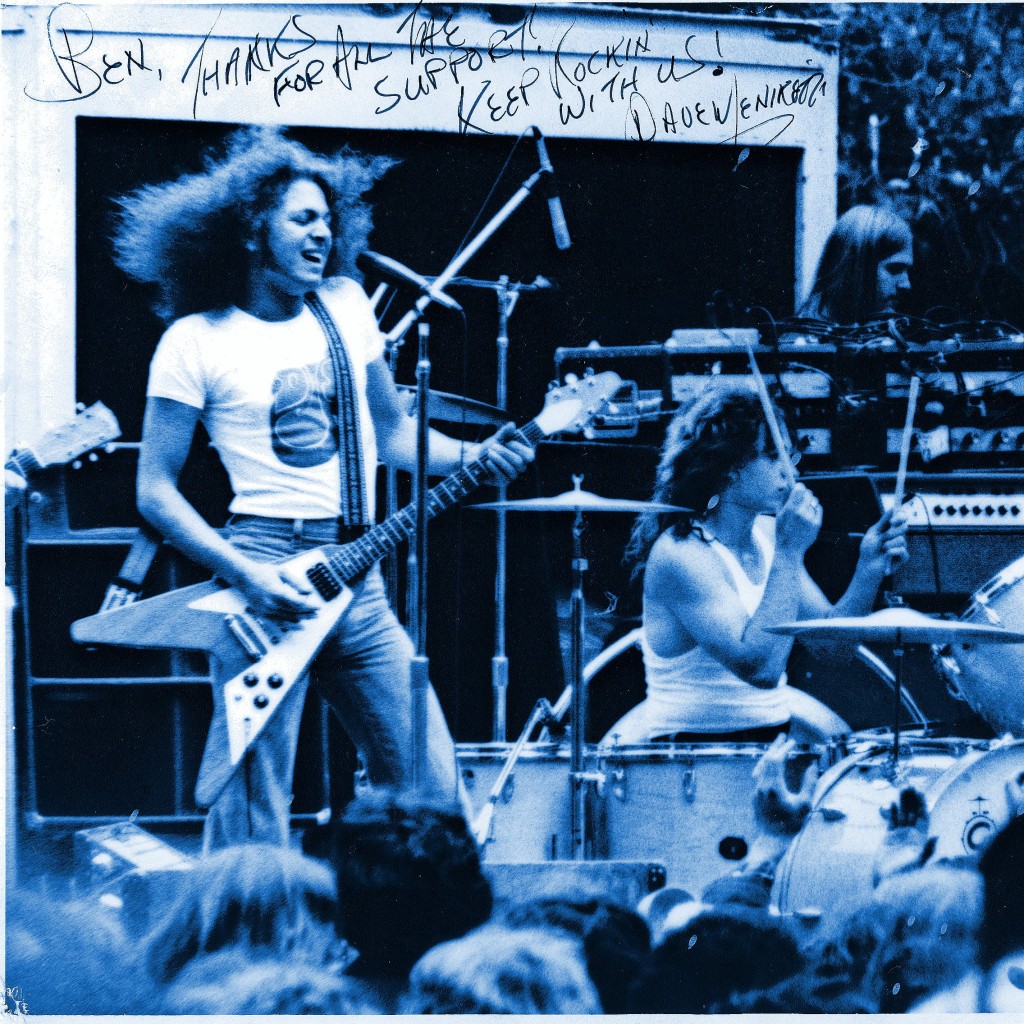 A few weeks ago I was in the dressing room at the Starwood, a somewhat showcase arena for new talent arriving in Hollywood. However, the group I talked to Saturday has, according to their publicity release, “arrived.”
The group is “Yesterday and Today.” They have just recently signed with London Records and their debut album “Yesterday and Today” is somewhat promising.
Yesterday and Today is composed of Dave Meniketti, lead guitar, lead vocals, background vocals; Joey Alves, rhythm guitar and background vocals; Phil Kennemore, bass, lead and background vocals; and Leonard Haze, drums, percussion, lead and background vocals.
In an “off-the-wall” manner where questions bounced from one subject to another, I interviewed Yesterday and Today in their dressing room before they took the stage.
MD: How did Yesterday and Today get started?
Dave M: Well, we wanted people to hear us and the only real way was to produce and promote our own concerts. We tried Oakland but Oakland is too funky.
MD: Funky?
Dave: Yes, too “Tower Of Power” and Graham Central Station”.
MD How did you go about promoting your own concerts?
Dave: We had money to put up. Then we just printed about 500 pamphlets and had some of our friends hand them out to the high schools in the area.
MD: Where was the first place Yesterday and Today played?
Dave: Well I believe it was “Ides Lodge Hall in Hayward.
MD: What does the Ides stand for?
Dave: If it stood for anything it’s beyond me.
MD: About how many people attended these self-promoted concerts.
Dave: Between 800 and 1,000.
MD: Were the concerts as “successful” as you thought they may have been?
Dave: Well, we played because we liked playing. As far as being successful we did get our music heard.
MD: How did the group come up with the name Yesterday and Today?
— Henry Bentley (loyal supporter and personal friend also in dressing
room): When the band was doing a concert at Treasure Island Naval Base for the enlisted men one thing lead to another and they were thrown but due to security. Later on that day the band called the promoter and during their conversation the promoter asked one of the members what the name of the group was. Not having a name, they used the first thing that came to mind and that was the title of an early Beatles album resting next to the phone, “Yesterday and Today.”
MD: Interesting. Well here is another toughie for the band. Do you feel that you’re a commercial band?
Leonard: Yes I think we’re commercial hard rock.
Joey: I think we’re commercial also. That is if commercial means selling a lot of albums.
MD: You guys were just on tour for the first time outside the West Coast. I heard that in San Antonio, Texas you got your best welcome yet.
Leonard: Well I don’t know if you can call it our best welcome but it was a welcome we won’t forget.
MD: What happened?
Leonard: San Antonio has one of the finest radio stations in the country; radio station KISS. Not any relation to our “Kiss” Station here at home. Anyway this station played our album “Y & T” before we got there. So consequently people in the S. A. area were familiar with our music.
MD: I heard the crowd would not let you off the stage.
Leonard: Well that’s true. We had already given three encores and if the house lights did not go on we would have given a fourth.
MD: Being a new band, did you have enough material to cover a fourth
encore?
Len: Oh yes. We have 30 written tunes.
MD: I also heard that when you were walking down the street in S. A. a car full of girls drove by and screamed “There goes Y&T”.
Len: Yes. That did happen.
MD: Dave. How did the title cut from your first album come about?
Dave: Well, if you mean “Alcohol,” it’s a true story about a friend of mine who got arrested by being under the influence of alcohol, and the song is his story.
MD: A couple more questions before you go on. Joey what did the band expect from this debut album?
Joey: Well it was like a test album. It would tell us where we went wrong or what we did right. We made the album so as to not overpower our live performance. We want to be better on stage than on an album.
Yesterday and Today are described by Henry Bentley as “steal on stear”. And for being the first such band out of the Oakland area Y & T will be here tomorrow.