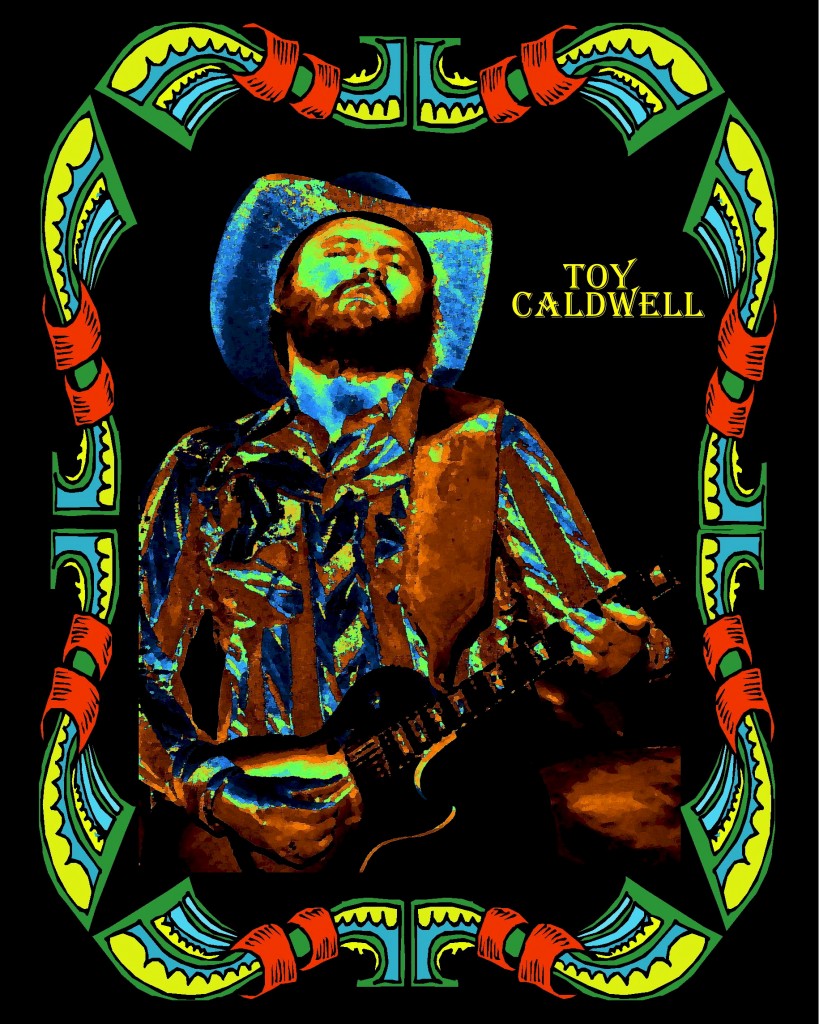 Toy Caldwell got “Marshall Tuckered out.” But he’s gotten over it.
The veteran singer-musician, who founded the Marshall Tucker Band and played guitar and sang in the group for 15 years until 1985, tired of 250 days on the road each year, so he quit. He retreated to his farm near Spartanburg, S.C., where he fished, read Stephen King novels and spent time with his wife and two daughters.
Recently, the stage beckoned to him. Once again, he was in Nashville in a dressing room where acquaintances assembled to shake hands and chat, often about his glory days. Then he took the stage, strapped a guitar around his stocky, Marine-carved frame and began singing.
Earlier, he explained what brought him to this stage: “It’s time to learn new music and get better at it.” He revitalized his creativity during his hiatus by practicing with his guitar and songwriting, he said. As a result, he’s back with recharged verve, his own full throttle band and a solo debut album, “Toy Caldwell.” It’s a mix of rock ‘n’ roll, country, blues and pop with a lyrical thread of romantic entanglements.
Before his recent performance, he sipped iced tea in a hotel restaurant and discussed his years as the driving dynamo with the Marshall Tucker Band and his new venture with his own four-piece group. His drawing power is his reputation from his Marshall Tucker Band days. The band had seven gold and two platinum albums, peaking in the mid-1970s with such songs as “Heard It in a Love Song,” “Can’t You See” and “This Ol’ Cowboy.”
Marshall Tucker headlined or shared stages with the Allman Brothers, the Doobie Brothers, Deep Purple and ZZ Top, among others. The band is still around, with two of its six members going back to Caldwell’s days.
“My name will always be associated with the Marshall Tucker Band and I’m proud it is,” he said as he adjusted a University of Miami Hurricanes cap. “They are good memories. It was a good band and sold a lot of records and I thought we did some good music. “We were the closest thing at the time between rock ‘n’ roll and country music. I think we bridged that gap. But I got tired of doing the same thing for 15 years. I’m Marshall Tuckered out.”
On his new album, he had plenty of top talent helping him. Willie Nelson sings on Caldwell’s version of “Night Life” —a song Nelson co-wrote — and Gregg Allman lends a hand on “Midnight Promises.” Charlie Daniels will appear on the video of “I Hear the South Calling Me.” Another of his musical comrades is blues great B.B. King. They toured together in the late 1970s, and Caldwell says it was his biggest thrill on stage. “I’d play on his set and he’d play on ours,” he recalled. “Those were fun days.”
Caldwell has long been respected for his guitar artistry. He’s played on albums by country stars Hank Williams Jr., Waylon Jennings, Barbara Mandrell and Conway Twitty. Among his songwriting credits is the anthem “Can’t You See,” which he sang at this year’s Farm Aid concert.
Reading King’s books during his hiatus even inspired the song “Love Turns Mean” on the LP. The tune is about a woman changing personality after she gets married. “Love just took a page right out of Stephen King. That’s what happens when love turns mean,” Caldwell sings. “It seemed to fit pretty good,” he said.

CLICK THE LINKS BELOW TO SEE TOY CALDWELL PHOTOS & ARTWORK:
WINTERLAND 10-11-75
and
CHENEY 5-26-77
and
MTB ARTWORK by BEN UPHAM III