Posted at 00:00h in BlogJams by Ben Upham
Share 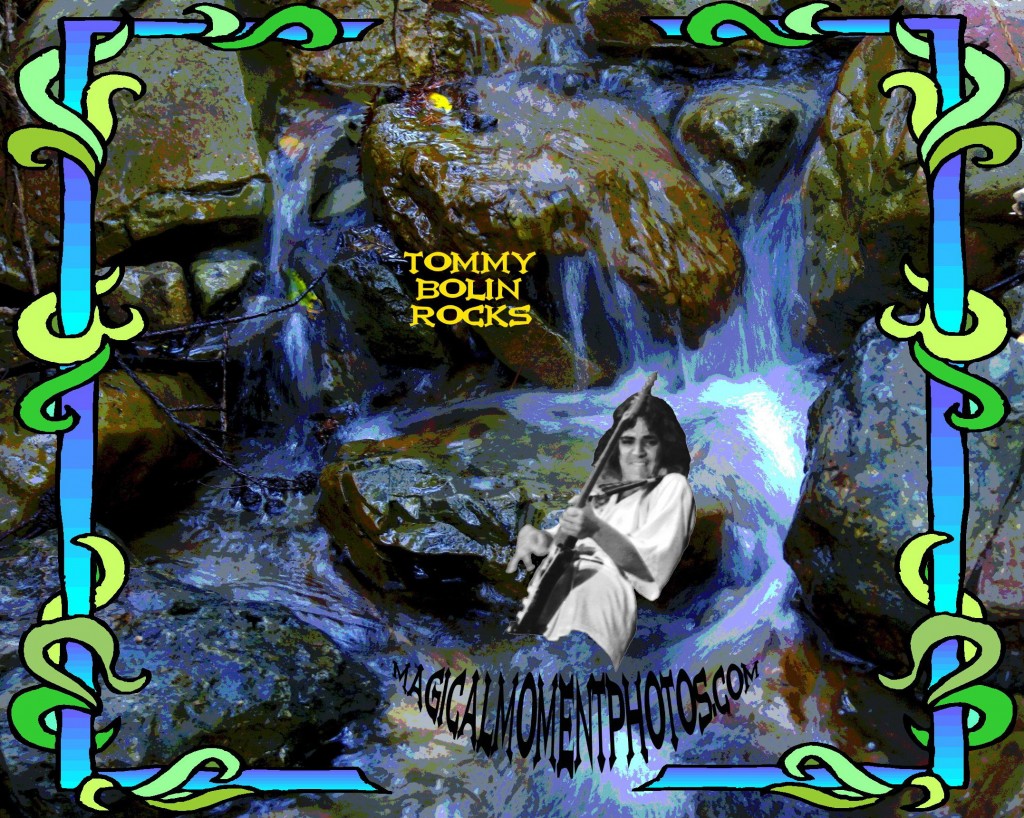 TOMMY BOLIN JAMMING IN THE CREEK ON MT. TAMALPAIS. PHOTO/ART BY BEN UPHAM.

This is a remarkable (and completely authorized) compilation. Every track is nothing short of a masterpiece. No release has ever done a better job of demonstrating what Tommy was capable of a musician and we should all be grateful that these recordings were discovered and presented here in the finest form.
Some songs are familiar, although very fresh and taken from different versions not heard quite like this before. “Teaser”, “Wild Dogs”, “Savannah Woman” and “Dreamer” all make stunning appearances showing Tommy in top form as both a singer and a guitarist. “Marching Powder”, one of Tommy’s trademark instrumental jams is featured here with bursts of guitar magic that will knock you off your feet. A new mix of “Crazed Fandango” (titled here as simply “Fandango”) is sure to have jaw-dropping effects on any listener.
But it’s the new songs, the songs we’ve never heard before, that will prove what a legendary player Tommy should be. A rough jam called “Cookoo” finds Tommy leading the way through heavy jazz/rock territory with lightning speed and fierce energy. Tommy seems to lay down the most intricate and beautiful guitar lines with effortless precision. And “Cookoo” is only a taste of the energy to come.
With “Flyin’ Fingers”, Tommy casts the rules aside and blazes through the 16 minute jam picking up every style you could imagine along the way. He uses elements of rock and jazz and Latin rhythms as stepping stones, blending them all into a style all very much his own before leaping into something new. By this point it is more than obvious how much Tommy’s genius has been ignored by history almost entirely. His sheer virtuosity is immeasurable and “Flyin’ Fingers” is proof of just that.
Rounding out the amazing set on Whips and Roses are two live tracks capturing Tommy in his best setting. “Just Don’t Fall Down” is a song from his most undocumented and underrated band Energy. Generally known as “Hok-a-Hey”, this track is Tommy’s playground, as he leads the band around mind-bending grooves, wrapping the monstrous riff around his own unmistakable style.
On “Blowin’ Your Cookies”, Tommy does just that. This track is taken from a jam with a hotel band at the Seven Seas Lounge in Miami just one night before his untimely death. It’s sad to imagine that night when you hear how remarkable his playing is. Tommy was in perfect form and his presence on this jam is felt very deeply. It is a fitting end to this amazing compilation, and an even better showing of what this master guitarist was capable of.
Tommy Bolin was one of the greatest guitarists to ever pick up the instrument. His playing is sadly forgotten, but if the world hears Whips and Roses, then he will surely be recognized for his genius. The world lost an incredible artist when Tommy died, and it would be a disgrace to music itself if he continues to go unnoticed. Listen to Whips and Roses and you will understand how profound his playing was. If you know who Tommy is, then you will be blown away by these rare gems now unearthed for all to hear. If you do no know Tommy, then do not continue to ignore some of the finest music you will ever have the chance to hear.

Tommy Bolin is undoubtedly the most underrated and forgotten guitar hero of all time. Nobody covered the scope of guitar playing better than Tommy as he effortlessly shifted gears from rock to jazz to blues to funk to reggae not only within an album, but within a single track. This CD showcases many of Tommy’s guitar stylings in a new light, bringing them sonically into today’s standards. I have been listening to Tommy for 20 years and own all of his studio releases as well as all of the Tommy Bolin Archives releases and this is the best quality yet. As other reviewers have stated, this material isn’t new but the versions presented here are stellar. Tommy was a master at jamming and some of his best work is captured on this CD. I have been turning people on to Tommy for years and they are blown away when they hear his playing. This CD will serve the same purpose for the younger generation today who have never heard playing of this calibur as it is non existent in today’s music scene. Tommy was a musician’s musician and was way ahead of his time, hopefully this CD will give new exposure to his timeless music. In sum, buy this CD, enjoy it and turn your friends and family onto this great musician.

In 2006 we were given this collection ‘Whips and Roses’. The music is stunning. Tommy Bolin’s singing and guitar playing is simply jaw droppingly good. The album opens with a rockin’ version of ‘Teaser’ which fairly rocks out of your speakers whilst retaining that trademark Bolin funky backbeat. A lot of the other songs are works in progress for the Teaser album, this does not mean that they are inferior versions in fact I think every song on this album is absolutely at it’s zenith, and the title of the songs is irrelevant. Second track on the album is ‘Fandango’ which was called ‘Crazed Fandango’ when the studio version was released. ‘Cookoo’ is a jam based on the Tommy Bolin classic ‘Homeward Strut’, but boy what a jam. The version of ‘Wild Dogs on this album is the best I have ever heard, and is worth the price of the album alone. Starting with it’s downbeat vocals of a drifter on the road, before Tommy makes the six strings howl as the song builds to a shattering climax. Why this song has not been covered by other bands I do not know, but somebody like Bon Jovi could do a cracking version. There is also Jeff Cooks beautiful ballad Dreamer here. Tommy Bolin must have burnt his fingers his playing is so fast on ‘Marching Powder’. You can almost hear the sweat running down the fret board. The fifteen minutes of Flyin’ Fingers speaks for itself. The album finishes with two jam work out’s with Tommy Bolin letting the music carry him away. ‘Just Don’t Fall Down’ clocks in at nearly eleven exciting minutes, the aptly titled ‘Blowin’ Your Cookies’ was recorded the night before Tommy Bolin passed away, when Tommy got up and played with the house band at his hotel in Miami. It is a twelve minute drop into what was obviously a longer jam, but the guitar work is staggeringly good. There is no information on who played what on what track as most of these recordings have been taken from unmarked boxes, but whoever they were they were very good. The album comes with a fine booklet with some informed liner notes by Simon Robinson. The production was handled by Greg Hampton in association with Tommy Bolin’s brother John. The work they have done should be applauded, a second volume of ‘Whips and Roses’ is promised for early 2007, I personally will look forward to that.

This CD has been long anticipated and it does not disappoint. As was the case with Tommy’s two solo albums, there is something for everyone here. There a few alternate versions of songs that ended up on his Teaser album. For example, the song “Teaser” is much more aggressive than the version that ended up on the album of the same name and, in my opinion, is better for it. And there are a handful of superb in-studio jamming that will make the hair on your arms stand up. There is so much of Tommy’s guitar buzzing around these tracks that any fan of his (and/or fans of rock/jazz-rock) will be satisfied.
I have only two negative comments (and the reasons why I can’t give it a full 5 out of 5 stars): the last 2 songs are not relevant to the bulk of material contained herein. The song “Just Don’t Fall Down” is clearly Energy running through their epic instrumental “Hoka Hey” live on stage somewhere in 1972 and “Blowin’ Your Cookies” is an excerpt from Tommy’s jam with the house band at the Seven Seas Lounge in Miami, FL (a night or two before his untimely death in Dec 1976). Its all good music to have in the collection but some more detailed sleevnotes would be helpful for Bolin fanatics such as myself. Which segues nicely to my 2nd issue: the sleeve notes lack any identification of the musicians accompanying Tommy and that is a shame because whomever the uncredited persons playing the bass and drums were, they were doing a marvelous job.
Thank you to the Bolin family and everyone who has worked on this set. I can’t wait for the next installment.

I don’t think it is too much of a stretch to say that this disc contains the most radical soloing ever heard from Bolin. You must buy it if you are a fan of great guitar playing. It is surprisingly like John Mclaughlin at times, yet, still totally Bolin. I thought i’d heard it all having owned all the Ebbetts field stuff, as well as the Mouzon/Cobham albums. The liner notes may be a bit lacking, but that is almost appropriate as this stuff almost seems too good to be true. There are 10 minute plus jams of pure guitar madness. How often does it happen that someone un-earths material like this.??..I am not sure it has ever happened. Yeah, never before has an artist been unveiled like this before, so long after they are gone. And this is the first of a series! Wow.