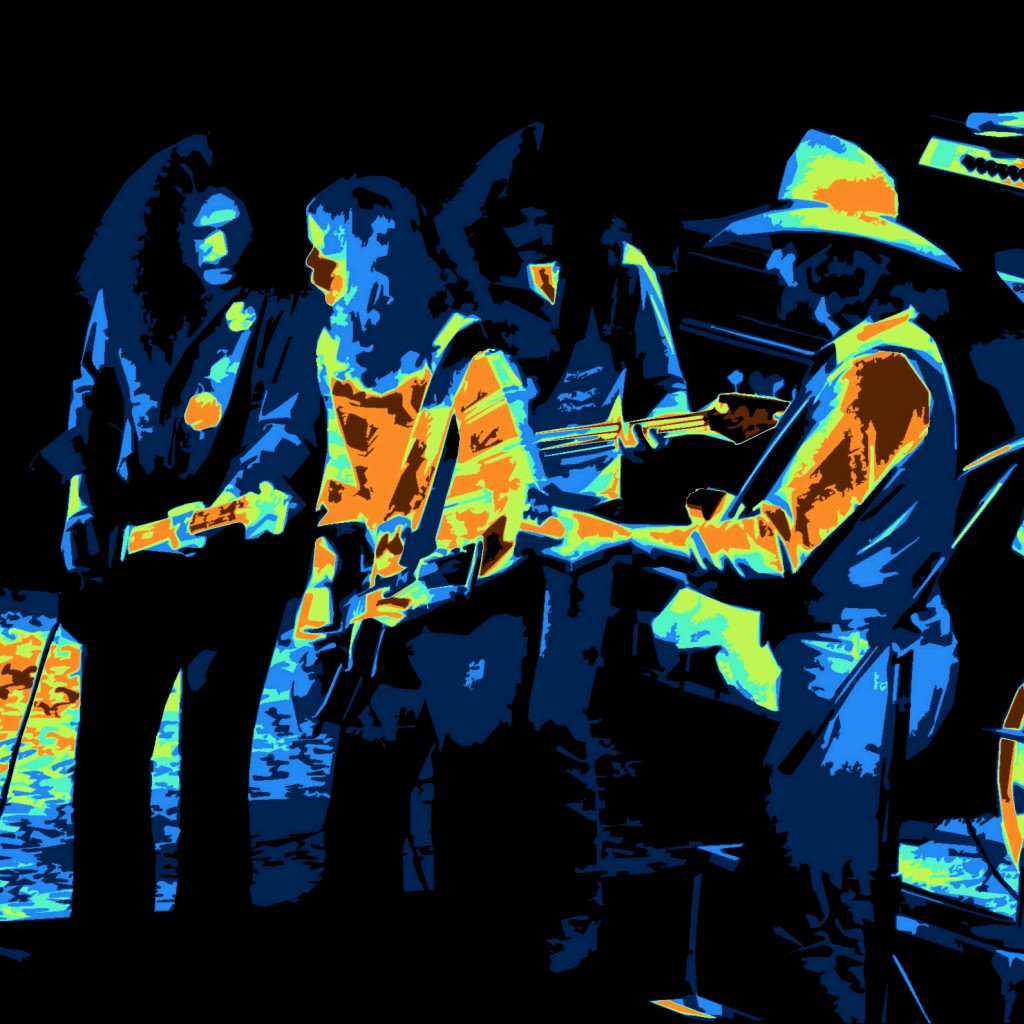 THE OUTLAWS AT WINTERLAND ON MARCH 6, 1976. PHOTO ART BY BEN UPHAM.

It’s pretty hard for any rock group coming out of the South these days to distinguish itself, given all the fine bands from that region featuring flashy guitarists, high-pitched harmonies and country-tinted melodies.
But The Outlaws, a five-member group from Tampa, Fla., have achieved success without deviating from that formula — by doing it better than almost anyone else.
“The Allmans showed us what two guitarists could do,” says Outlaw Hughie Thomasson, who had been playing in a band with drummer Billy Jones when the Allman Brothers burst out of Georgia and onto the national scene in the early 1970s. Jones dropped his drumsticks, grabbed a guitar and went to work. The results are astounding, if a recent concert at the Capital Theatre here is any indication. Jones lyrical, flowing guitar lines sound like he’s been playing the instrument all his life. His jams with the flashier, more explosive Thomasson kept the crowd screaming through most of the 90-minute show.
The band stuck primarily to material from its two albums, throwing in a few cuts from an upcoming record set for release this month.
The Thomasson-Jones guitar duels grabbed most of the crowd’s attention, but such songs as “Stick Around for Rock and Roll” and their hit, “There Goes Another Love Song,” were popular too.
The high point of the set was “Green Grass and High Tides” which climaxes in a 15-minute guitar duel between Thomasson and Jones. That song and others are very similar to the music of Lynyrd Skynyrd, another Florida band with whom the Outlaws have toured extensively.
But one of the big differences between the groups is that Skynyrd has a lead singer on whom the audience can focus its attention, while four of the Outlaws write and perform their own music on stage. “We do it that way on purpose,” Thomasson says, “so there’s no pressure on any one person. It gives everyone a chance. We’re there to play — not to put on a stage show.”
The new material, which included several country-flavored tunes by rhythm guitarist Henry Paul, generally sounded stronger than songs on the second album, which sold only about half as many copies as the initial release. “We’re taking it slow this time”, Paul said after the concert here, which was recorded for a future live album.

CLICK THE LINKS BELOW TO SEE OUTLAWS PHOTOS & ARTWORK:
WINTERLAND 1975 & 1976
and
ARTWORK BY BEN UPHAM III