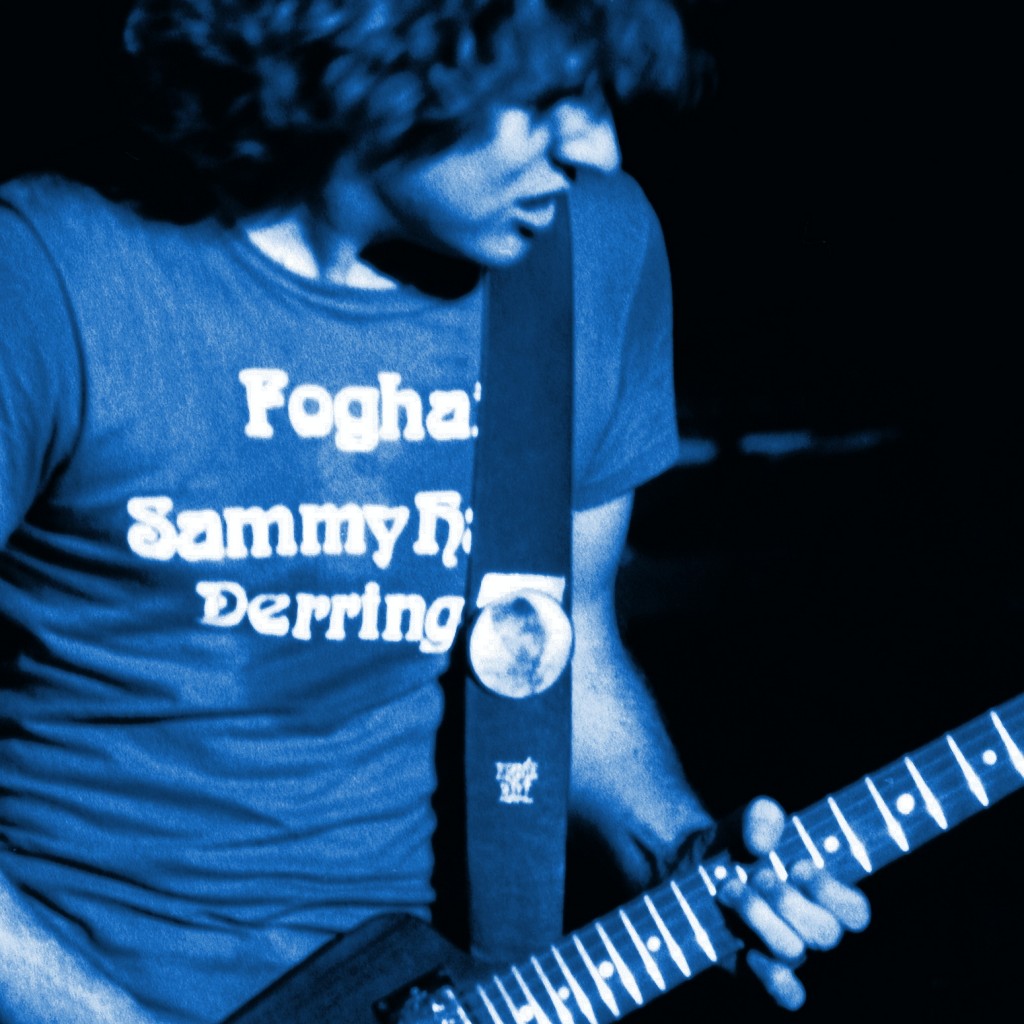 SAMMY HAGAR ROCKING OUT ON HIS GUITAR IN SPOKANE, WA. ON 2-2-77. PHOTO BY BEN UPHAM.

What happens to punk rockers when they grow up? Sammy Hagar 29, and 28-year-old Rick Derringer have been in the rock and roll business for 15 years and more, and both are in the process of shedding old images and building new ones.
Even at their ages these guys look like 14-year-olds, and don’t mind their punk associations. Hagar, who lives with his wife of eight years, a Son, and a 750 pound telescope at his Mt Tamalpais home spent years building his career as Montrose’s lead singer, only to find he didn’t want to be a Robert Plant clone. Dropping the old ways of British inflection and Daltrey-mopped hair, the now close-cropped screamer still looks a punk under the spotlight.
Derringer has also been married eight years, calls Manhattan home.
On stage recently at Winterland, and a week later before 15,000 rock fans at the Cow-Palace, Hagar was the epitome of the school bully with his curly blond hair and toothy sneer, cockily strutting about with microphone stand in tow. “I’m not being phony up there,” Hagar said later. “I’m living out my fantasy trip.” His three years in the band Montrose taught Hagar how to excite an audience and he still has the ability to pull that off! The punk star role without seeming foolish. It’s a cute and effective affection.
But offstage Hagar becomes a low-key conversationalist, wants to contribute what he can to rock and roll, and to the world. Hagar is starting all over from scratch with a solo career.
“I got a name when I was in Montrose,” he said, “and fans came as much to see me as Ronnie (Montrose). That’s why we can never work together again. We both have leader’s egos, and a band can’t have two leaders. But off stage Ronnie’s still one of my classiest friends.
“So I left Montrose two years ago, and I’ve had offers from several record companies.” He signed with Capitol, and early last year put oat his solo album, “Nine on a Ten Scale” (Nine is his favorite number.) With a band whipped into shape, he headed out on the concert circuit to make a name for himself. Fifteen shows later everything collapsed.
“That Day on the Green last summer was our last Bay Area show,” Hagar painfully recalled. “That was the worst show I ever did. Here I am anti-drugs in my band, and I didn’t even know my guitarist was a cocaine freak. But by that show I was wondering if he would even be able to play. I felt terrible; and three months later he was dead from an overdose.”
Without Hagar on the road promoting the album, its sales went nowhere. Lawsuits involving his manager Jerry Berg didn’t help. But Hagar bounced back into action. Eight months later with a new band, a new album called “Sammy Hagar” and a new manager, it looks like the worst is behind Hagar. “Ed Leffler (his new manager) told me to forget the first album and just start over.
“Ever since I was at grade school and my big sisters were listening to Elvis doing ‘Hound Dog,’ I knew I wanted to be a big star like Elvis. I
knew I could do it, I don’t have a good education but in my head I think I know a lot about how to live.”
In high school in Fontana, a Southern California steel town, Hagar played in local bands and worked in a record store. “They caught me giving away records to a friend (who is now the head of his road crew), and fired me. That’s the best thing that ever happened to me. I started playing music full time.”
Hagar moved to San Francisco six years ago and joined Montrose
two years later. “I was on the Robert Plant- Roger Daltrey trip in Montrose,” he remembered. “But I was screaming, I wasn’t singing. And we weren’t doing the music I wanted to do. I could sit here with an acoustic guitar and sing some of my songs and you’d have an idea what they sound like, but if I did a Montrose song like ‘Rock the Nation,’ there’s no way it’d come off. But Montrose taught me how to rock.”
Hagar’s new album is strong, varied and impressive. It’s a mixture of old songs he loves “Catch the Wind,” “Fillmore Shuffle,” “Hungry”, his own songs in a teen rock vein “Cruisin’ and Boozin'” and “Rock and Roll Weekend”) and some deep, material (“Little Star/ Eclipse”).
Ranging from ballads to hard rock, the tunes all have strong melodies to carry them (something Montrose’s material lacked). Hagar does the
vocals, guitars and arrangements. “The first thing I look for in a song is lyrics. I can always change the music. But I like good lyrics that aren’t the usual ‘I Love you, baby,’ but have a bit of pain and emotion. like in ‘Catch the Wind,’ the Donovan song, it’s I love you but I may as well try and catch the wind.’

CLICK THE LINK BELOW TO SEE SAMMY HAGAR BAND PHOTOS: