Posted at 15:28h in BlogJams by Ben Upham
Share 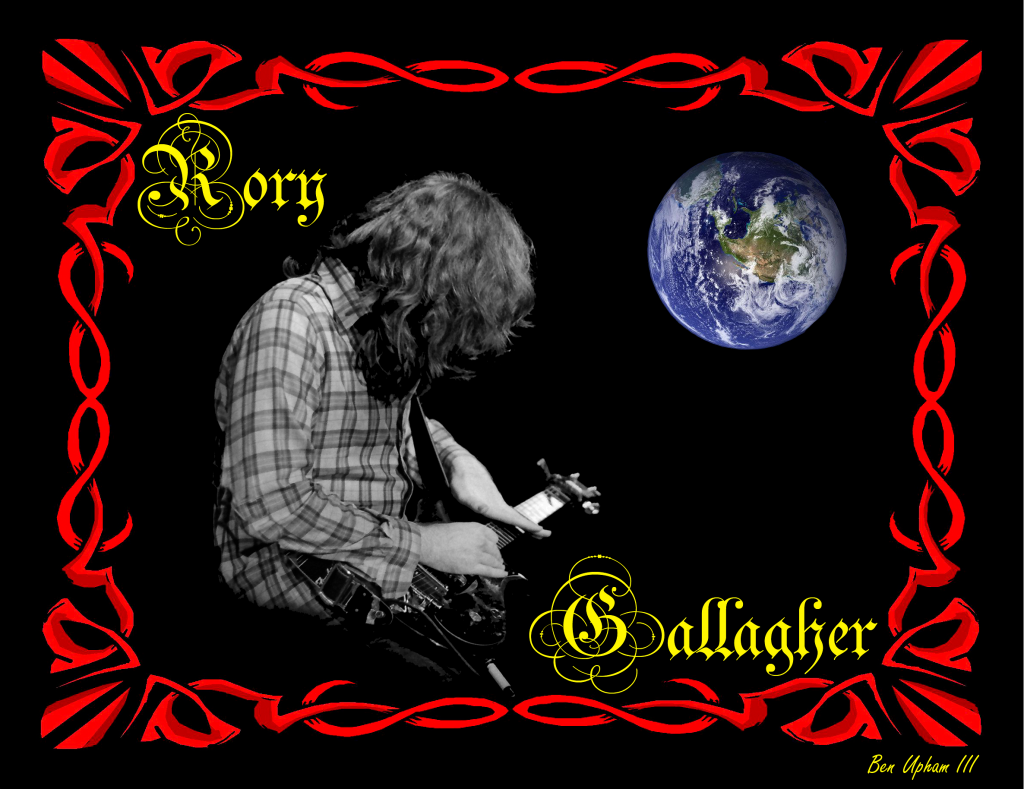 My first exposure to Irish blues rock musician Rory Gallagher came in early 1975. I was looking through the record racks at the “Village Music” record store in my hometown of Mill Valley, Ca. when an album cover really caught my attention. There was Rory staring right at me, pointing his guitar at me and showing enough attitude through his expression to make me very curious!
The words “Rory Gallagher- “Sinner… were the only text on the front cover of the album. Flipping the album jacket over revealed another stunning concert photo of Rory with his guitar pointed up towards the sky, and the text …and Saint”.
The album cover photography by John Gellman had really pulled me in!
The song titles looked interesting, “Sinner Boy”, “Just the Smile”, “Crest of a Wave”, “I’m not Awake Yet”, and “There’s a Light” among others. I also noticed that Rory was credited with vocals, guitars, sax, harmonica, and mandolin. What I didn’t realize at the time was that the album was a compilation of songs from his first two solo albums, “Rory Gallagher” and “Deuce”, released back in 1971.
I purchased the album and went home to listen to it. After one listen I was already a fan! Rory didn’t sound like any other artist I had ever heard and his style was full of good energy and emotion.
I went back to the record store a week or two later to see if there were any other albums from Rory that I needed to hear. That’s when I spotted “Rory Gallagher Live” (aka “Rory Gallagher- Live in Europe 1972”). This album also had an excellent live concert photo of Rory on the cover. He was playing an old beat up Fender Stratocaster with a Slide! The back of the album jacket featured another concert photo of Rory. I noticed that the album was recorded live in early 1972 and decided to plunk down the cash and take it home! Now I would have the opportunity to experience Rory in a live concert setting and I was very anxious to hear it.
The live album blew me away! Great recording, bristling with energy and diversity, great rockers, stunning solos, acoustic songs, and a tight band as well!
I realize that it’s true when it is said, “You can’t judge a book by it’s cover”, yet with Rory, the album cover was essentially what guided me to the musical treasures contained within the grooves of the vinyl.
Since those days in early 1975 I have collected every album, CD, and DVD that has been released by Rory. He is a great musician and songwriter who puts on a terrific live show and adds new life to his songs every time he plays them!

My first time seeing Rory live in concert was at Winterland in San Francisco, Ca. on 11-16-75. Atlanta Rhythm Section and Gary Wright were the opening acts. This was the only time that I sat up in the balcony behind the stage there. It was cool looking down at the crowd enjoying Rory, but it wasn’t the greatest place to take pictures from. The music sounded really good hearing it from the stage monitors.
I remember a few of the musical highlights from that show being “Messin’ with the Kid”, “A Million Miles Away”, “Lost at Sea” and great acoustic renditions of “As the Crow Flies”, and “Too much Alcohol”. The encores that evening included “Bullfrog Blues” which jammed itself into a spectacular “All Around Man”! I would love to find a recording of that show, if anyone knows of one please contact me!
CLICK HERE TO SEE MY WINTERLAND 11-16-75 PHOTOS

When I moved to Spokane in August of 1976 I remember that Rory’s “Calling Card” album had just been released. After I got a job at Eucalyptus Records there in October ’76, I used to play that record in the store quite often and it always sold a few copies when it was playing!
On December 18, 1979 I drove from Spokane to Kent, Washington(just outside of Seattle) to see and hear Rory play at the “Ad Lib” Tavern in front of a small crowd of about 200 people! The weather was bad and there was a “Winter Snowstorm Advisory” in effect for the evening hours. The trip over went fine and we arrived in plenty of time for the show. This was the concert that most of my photos of Rory were taken at.
The band was touring to promote their latest release, “Top Priority” which was classic high energy Rory that begged to be played on stage!
The Kent concert was a rowdy, sweaty, loud extravaganza that blew the roof off of the building. Rory’s set list was “Shin Kicker”, “Follow Me”, “Moonchild”, “Off the Handle”, “Wayward Child”, “Tattoo’d Lady”, “Calling Card”, “Last of the Independents”, “Bad Penny”, “Mississippi Sheiks”, “Bought and Sold”, “Walk on Hot Coals”, “Shadow Play”, and then four encores, “Bullfrog Blues”, “Messin’ with the Kid”, “Country Mile”, and “Secret Agent”!
If you know Rory’s music then you can clearly see from that set list it was a really rockin’ show! No acoustic break that time. The energy from Rory’s performance kept us safe and alert on the treacherous, long, 280 mile journey home from Kent to Spokane through the snowstorm that evening.
About seven months after the Kent show I moved back down to California. I lived in Redding, Ca. for three years and then Novato, Ca. for a couple more. It was during that time that I attended my final Rory concert on 5-17-85 at “The Stone” in Palo Alto, Ca. Some friends of mine made the 1,000 mile trip down from Spokane to see Uli Jon Roth & Electric Sun on 5/16 and then Rory on 5/17.
We arrived at the “Stone” early, around 4:30, and decided to have a nice “Smokeout” in the car with all the windows rolled up. It was like a scene out of a Cheech and Chong” movie as the car was completely filled with smoke. When it was time to get out of the car we opened the doors and the smoke came billowing out like a big cloud! Right at that exact moment a car pulled up and parked right next to us. Rory Gallagher got out of that car and looked over at us with a big smile on his face! We were all stunned, and shocked, and stoned and very happy to see Rory up close and personal!
He walked over and shook our hands as we introduced ourselves to him explaining how several of us had made the 1,000 mile voyage for this event. He was touched, and thanked us for our appreciation and dedication to his music. He said that he would try to put on a good show for us so that the trip would be worth it. And boy did he!!!
Rory ran out on to the stage that night with a full head of steam! The set opened with a killer version of “Double Vision” from the great 1982 album “Jinx”. Then he jammed his way in to “Bad Penny” and an amazing extended version of “Off the Handle”. Followed by “Moonchild”, “Big Mouth”, “I Wonder Who”, “Tattoo’d Lady”, “Mississippi Sheiks”, and “Big Guns”. At that point in the show Rory gave us a little break and pulled out the acoustic guitar for “Out on the Western Plain” and a wonderful “Seven Days of Thunder”.
Then the electric sitar came out for “Philby” and back to the strat for “Follow Me” and the encores of “Shadow Play”, “My Babe”, “All Around Man” and “Bullfrog Blues”.
Another amazing set of great Rockin’ Irish Blues by one of the best musicians I have ever heard!
CLICK HERE TO SEE MY KENT, WA. 12-18-79 PHOTOS
Rory continued performing for another ten years although his health was declining. His U.S. tours were limited due to his fear of flying. In May of 1995 Rory had a liver transplant that was nearly successful. However, just before being discharged from the hospital a MRSA infection developed. His health quickly worsened and he died in London on June 14, 1995. A very sad day indeed!

CLICK THE LINKS BELOW TO SEE RORY GALLAGHER PHOTOS & ARTWORK:
WINTERLAND 11-16-75
and
KENT, WASHINGTON 12-18-79
and
ARTWORK BY BEN UPHAM III