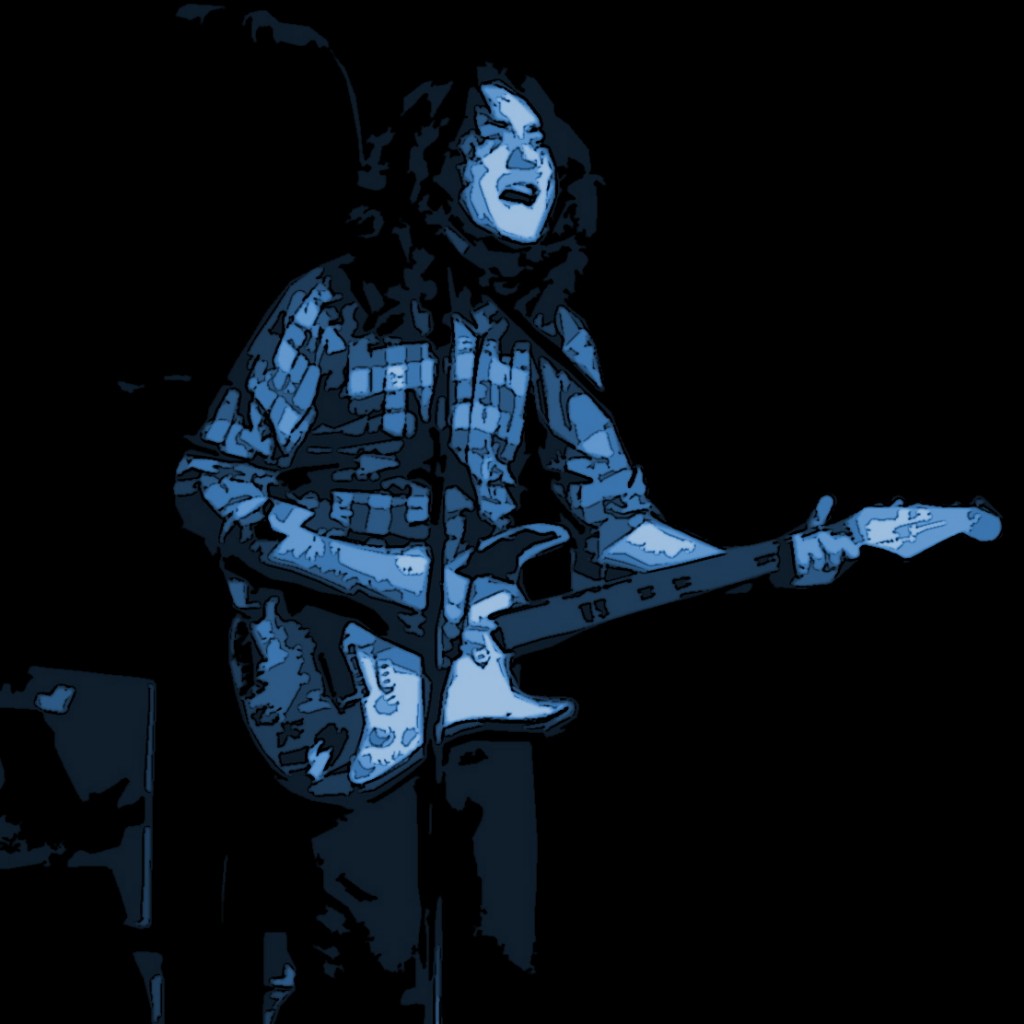 RORY GALLAGHER —”LIVE IN EUROPE”!
I guess you could call me a rock and roll junkie. While some people do dope to get off and others drink, all that I really require is some driving, foot stomping rock and roll to keep me satisfied.
Like most rock critics, I too, am a frustrated musician. Many people aspire to be political leaders, others wish they could be great athletes. My dream, as futile as it may seem, would be to become a rock and roll star. Sure, The Byrds warned about all the trials and tribulations which go into becoming one, but still, haven’t you ever imagined yourself standing on stage in front of 10,000 screaming fans, all of them hanging on every note you sing and each excruciating little riff you extract from your guitar?
What it all comes down to is you can have your hotshot football heroes and politicians, I’ll take a rock and roller any day of the week.
At the top of the heap is Rory Gallagher, the consummate singer, guitar player and song writer. To put it bluntly, if I had an idol, this man would be it.
A few months ago in a review of Rory’s last album, “Deuce”, I wrote Gallagher is undoubtedly one of the finest, most versatile guitarists
currently playing. Add to this a unique vocal style and excellent material ranging from hard rock to melancholy ballads, and the end product is sheer magnificence.” If it’s possible, my feelings about his music are even stronger with the release of his third solo album, Live in Europe (he can also be heard on the three LP’s he recorded as the leader of Taste). Although the album lacks the polish and slickness of “Deuce”, the energy and vitality which Rory interjects into his live performances more than compensates for them.
“Messin’ With The Kid” starts things off, and while a friend, Don “Fabulous George” Jordan, suggests that it doesn’t approach the original version by Junior Wells, it’s still a strong, uptempo number with some solid guitar work. “Laundromat”, an overt out and out rocker is next. In several respects, it’s superior to the studio version on Rory’s first LP (unavailable in Canada) with a catchy guitar line and a dynamite vocal. One of the real highlights is “Could Have Had Religion”, a long-time standard given a brand new arrangement. The subtlety of the guitar work and some fine harp make this selection one of Rory’s best forays into the blues to date.
Side two spotlights an extended workout on “In Your Town”, a gutsy, down to earth rocker about a guy who’s been locked away for “22 years, 23 hours, 24 minutes” and comes home to seek a little revenge. While it lacks some of the guitar dynamics heard on Deuce, it still rocks like all screaming Hell. “Bullfrog Blues” wraps things up, with bassist Gerry McAvoy indicating that he has improved greatly over the past six months or so.
For a live recording, the sound is extremely good. And the music — well, it’s just plain something else. For my money, Rory Gallagher is the most effective guitarist-vocalist anywhere hands down. Find out for yourself. A. * * * * *

CLICK THE LINKS BELOW TO SEE RORY GALLAGHER PHOTOS & ARTWORK:
WINTERLAND 11-16-75
and
KENT, WASHINGTON 12-18-79
and
ARTWORK BY BEN UPHAM III