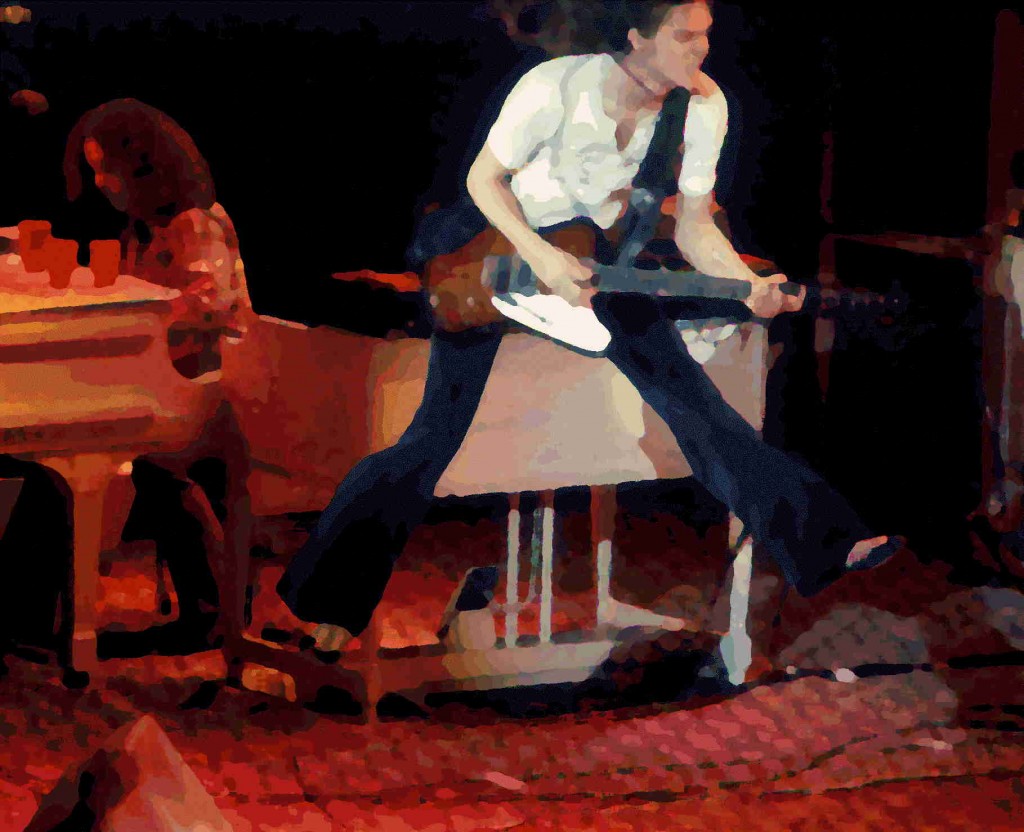 ALLEN COLLINS SOARS DURING THE PEAK OF HIS "FREE BIRD" SOLO AT WINTERLAND ON 3-6-76. PHOTO BY BEN UPHAM.

Wednesday night’s screaming, full-house audience at Boston’s Orpheum Theater proved convincingly that Southern bands are much more than wailing, guitar-pickin’ hillbillies.
Both from Florida, The Outlaws and Lynryd Skynyrd gave evidence that their musical contributions are as valid as any other American bands.
The Outlaws gave an electrifying opening performance to an overwhelmingly enthusiastic audience, frequently spotlighting the talents of their two lead guitarists, Billy Jones and Hughie Thomasson. Very tasteful harmonizing guitar solo’s were augmented by an additional guitarist, a bassist, and a drummer, who provided a solid foundation in all their numbers on which the guitarists built.
Lynyrd Skynyrd began as a boisterous bar band in Jacksonville, Florida. Their name came from their mockery of a gym teacher, Leonard Skinner, who repeatedly had three of Skynyrd’s members expelled from high school for having long hair. By mid-1973, their hard driving style had developed and had already landed them a recording contract.
Their big break materialized in 1974 when they were asked to tour with The Who. This brought them in front of large audiences who heard their rock spiced with “down home” flavor as performed by several talented musicians.
As Skynyrd came on stage, a fight in the audience was quelled when singer Ronnie Van Zant, his southern drawl evident said, “You’ll can fight if you want to, but don’t fuss.” Ronnie proudly displayed his half-beard and Bruin’s T-shirt, beginning the show with “Double Trouble”, a funky rocker from their latest album, “Gimme Back My Bullets”. His voice was weak at times, but he did his best to hide his recurring throat problems that may eventually end his singing career with the band. Ron Eckerman, Skynyrd’s road manager, confided that Van Zant’s voice was “raspy from touring”, but Ronnie has undergone surgery for a torn vocal cord and still has throat problems.

Though their audiences are always more than receptive, their records have not sold well in the Boston area. Eckerman feels “they’re a live band. Because radio stations don’t play their albums, no one understands the band. In fact, every Southern band has problems in Boston,” Nevertheless, Lynyrd Skynyrd usually play to sold-out audiences.
Guitarists Gary Rossington and Allen Collins played with the brilliance of a super-nova, trading guitar riffs and displaying their understanding of and union with their instruments. Artimus Pyle’s overhand drum technique provided pounding rhythms that accented the gutsy, rash guitar work, especially on “Saturday Night Special”, “Needle and Spoon”, and ” Gimme Three Steps”, an interesting tune about being involved with another man’s woman.
Later in the show, Van Zant commented “there’s enough guitars up here to start a store”, referring to Jones and Thomasson of The Outlaws joining them on stage for “T for Texas” and “Sweet Home Alabama”. A Confederate flag was unfurled during “Alabama” to the screaming delight of the fans while four incredibly coordinated guitarists blended their talents and abilities to create a harmonizing effect that overwhelmed all.
After a 12-minute standing ovation, Lynyrd Skynyrd performed “Free Bird”, then left the theater to rest for the next leg of their seemingly endless tour, having covered at least 50 cities so far. (No one in the band was quite sure of the figure.) They had delivered to the crowd, the best rock possible, and satisfied with the intensity of applause,
decided it was time to rest. They had dispelled the myth that all Southern bands were alike … and had done it very well…