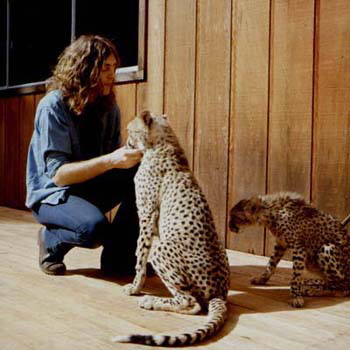 LEE MICHAELS WITH HIS BIG CATS THAT I CUT MEAT FOR. MILL VALLEY, CA. 1970.

Lee Michaels fans at the Long Beach Auditorium were set to boogie Saturday night, and Michaels was more than cooperative. After a two-year absence from Los Angeles area performances, Michaels enjoyed his return to stage just as much as the audience.
Wearing an ear-to-ear grin, an old t-shirt, torn Levi’s and a pair of moccasins, Michaels displayed his avoidance of the glitter, plasticity and egoism typical of pop superstardom. He was just the boy next-door playing the organ and guitar for friends, and really digging it. The crowd was ready for Michaels. While tight during the first act, a Chicago-based group called Rufus, the audience loosened somewhat for the Bay-area group, Sons of Champlain, enough to bring them back for an encore, the rock ‘n’ roll
classic, “Linda Lou.”
Then Michaels, drummer Keith Knudsen and guitarists Joel Christy and Drake Levin took the stage unannounced and got down to business immediately. The first number featured puppet-like Knudsen in a driving drum solo that got the audience ready for what was to follow: downright boogie.
Michaels relied primarily on songs from past albums, especially “Recital,” and surprisingly, did only a couple of numbers from his latest Columbia release, “Nice Day for Something.”
He chose the mellow “Bell” from that album to bring his fans to a plateau before getting them even higher with numbers like “Keep the Circle Turning,” “One of These Days,” and “Every Time.”
Perhaps one of Michaels biggest hang-ups is his band. While he has evaded the extravaganza show of 20 or 30 traveling performers employed by musicians like Elton John and Leon Russell, he could have made a wiser choice with his on-tour guitarists. While their musical prowess is undeniable, Christy and Levin seem to have the secret desire to upstage their unsuspecting, happy-go-lucky leader.
Michaels’ performance was somewhat brief, perhaps because he snared the bill with two groups instead of the usual one.
The crowd was greatly disappointed when Michaels walked off stage, but after receiving five minutes of standing (on the seats) ovation, Michaels returned for one number and had his fans clapping their hands, stomping their feet and hoping fliat it wouldn’t be another two years…

Please contact me if you know of any rare- Live recordings of Lee Michaels!
@ benupham3@comcast.net