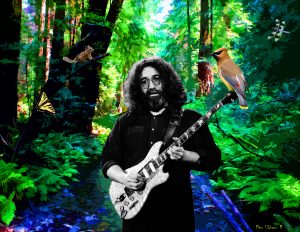 As if this might be the last gig ever played, the members of the Grateful Dead took the stage at their ol’ familiar haunt, the Winterland Arena, on the evening of December 27th, 1977 and immediately burst into flames.

To put it more sensibly (and without conjuring up Spinal Tap drummer imagery), Jerry and gang came out of the gate with so much energy that they nearly blew the roof off the place with the first song of the night and they let the show snowball from there. The Bertha-> Good Lovin’ that opens the first set just sweeps you off your feet and it’s readily apparent that Garcia is in one helluva guitar-slamming mood. Every song reaches a scorching peak as if no amount of joy could be contained but must instantly be transferred to all in attendance, even those hiding in the farthest rows or standing outside the walls of the arena itself. The Brown-Eyed Women may well be the most energetic version you’ve ever heard. And while the entire show is wild with energy, it’s the first set that shines brightest with an excitable tightness that was 1977. Even mellower tales like Peggy-O and Friend Of The Devil have claws. One need only close their eyes and listen to see Jerry’s high-energy grin as he owns each and every chord.
The second set is a musical amusement park of swirling rides and exhilarating twists and turns, though it rarely attains the confident figure-hugging tightness of the first set. But that doesn’t mean it’s anything less than spectacular. Garcia’s still roaring and Bobby’s rhythm guitar is clean and sharp. The vocals are strong (if a tad lower in the mix than the first set) with terrific harmonies enhanced by an unusually beautiful and inspired Donna who never steps on any toes here and is, quite simply put, at her melodic best.

The Cold Rain And Snow opener will have you spinning with chaotic abandon, followed immediately by a rare second set Lazy Lightning-> Supplication that will leave you breathless. The remainder may not be unusual set-list-wise, but the rocking and rolling is at a fever-pitch, if not a tad imprecise in moments, but that’s mostly when compared to the flawless first set. By any other standard, this is one helluva second set!

I sat down to listen to this night’s pre-New Year’s Eve festivities with the full intention of simply whetting my appetite with a couple of choice songs. But as the evening wore on, I realized I was in for the long haul. There was no way I wasn’t gonna follow this show into its final notes.