Posted at 19:30h in BlogJams by Ben Upham
Share 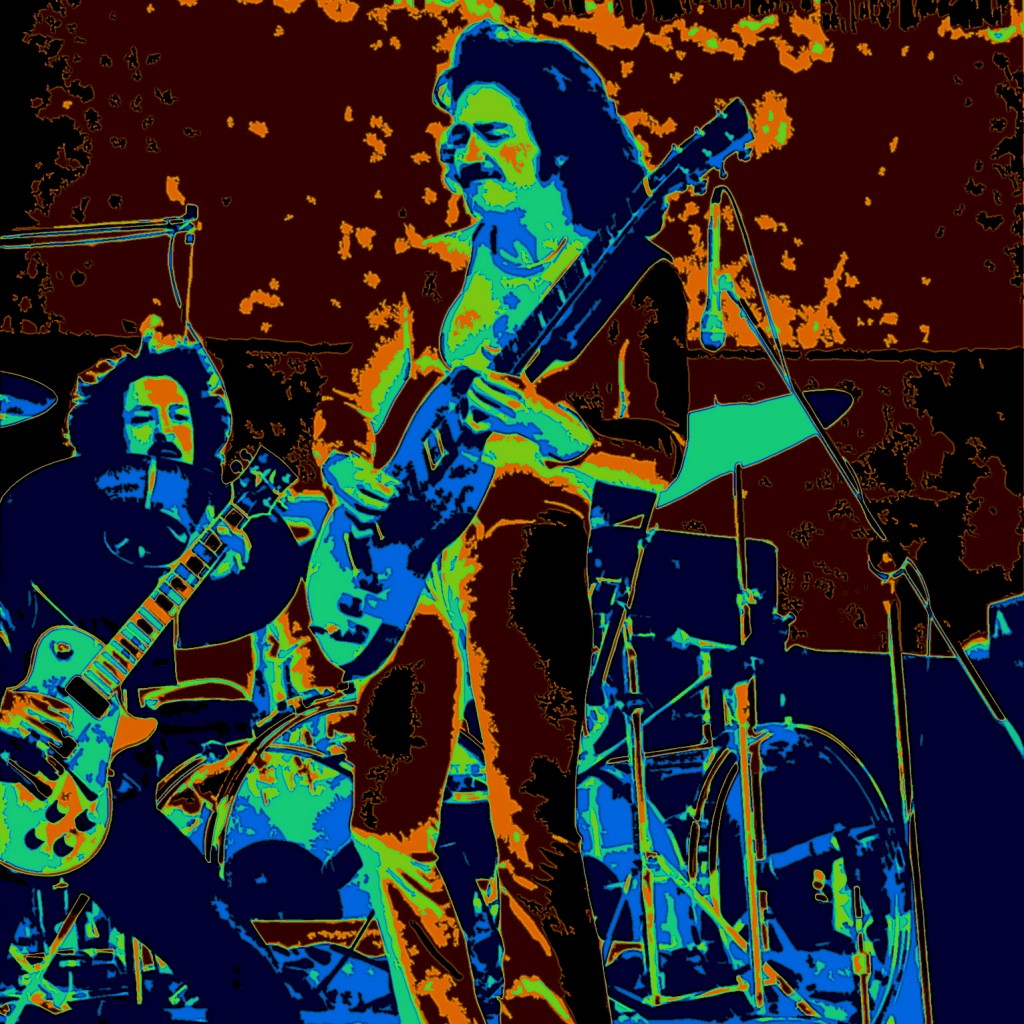 THE AMAZING BLUE OYSTER CULT ELECTRIFY THE SHOW AT OAKLAND ON 6-6-76. PHOTO-ART BY BEN UPHAM.

You want spectacle?
Try Earth. Wind and Fire three nights at the Oakland Coliseum Arena, or Blue Oyster Cult Saturday at the Cow Palace.
Never mind the music, these shows attract an audience to see mind-blowing circus.
EWF’s Friday opener was preceded by soul band Pockets which, for the 20-minute spot “it was given, showed some potential. Deniece Williams was over-dramatic and under-clothed, and in a small theater would have been at home, but in the Coliseum cavern was out of place. Their mentors, EWF, followed with an eye-opening two hours of colorful costumes and props. The band’s creed of happiness and meaning through positive living was carried out through visual imagery. Egyptian mythology, astrology, magic, pyramids and some effects straight out of Star Trek. It was not unlike a funk interpretation of a Sun Ra concert.
After an opening gong ceremony, nine transparent tubes descended to the stage, and with a flash of smoke appeared to fill with the core members of the band. Up went the tubes, and on went the music: “Serpentine Fire.” the No. 1 hit from the new “All in All” album, helped by flashing and twirling of robes. The finale featured several golden spacemen preparing a large pyramid into which the band members disappeared, then the pyramid ascended above the stage, and in a flash of smoke blew open. The spacemen standing below took off their helmets and—surprise!—it was the band.
Master magician Doug Henning designed the stage trickery for the EWF show. Too bad he did not do something to improve the music. Once a raw but original percussion-oriented band, EWF has become too slick and image conscious of late. Their records may sell a couple million copies each now, but they lack the human quality and distinctiveness of earlier material. Still, EWF provides great entertainment. Leader Maurice White spends most of the time clutching at himself and strutting about, while bassist brother Verdine and guitarist AI McKay are non-stop dancers. How can anyone not like a band that enjoys performing as much as EWF does?
After obnoxious opening performances by Piper and Black Oak Arkansas (the latter at least plays competently, although Jim Dandy’s vocals are still a questionable matter), Long Island’s heavy metal masters Blue Oyster Cult dazzled with their biggest production yet.
Ignoring the musical aspects, there are two basic ways to stage a rock show: with props or with lights. Where EWF used the former. BOC relied on one of the most elaborate lighting systems extant. The result-with fog machines, tons of colored lights and three laser machines augmented sonically by a quadraphonic sound system—was technically advanced over that of the Wings show, and made Electric Light Orchestra’s laser extravaganza seem as effective as a flashlight.
Like EWF, BOC’s present music does not match the raw creative energy of its early days. Opening song “R. U. Ready 2 Rock” kicked off a dull 20 minutes that finally started to pick up with “Golden Age of Leather.” and by “Then Came the Last Days of May” and “Godzilla” the band and audience were in high gear. For “Godzilla” the Cow Palace was filled with hundreds of green laser beams bounced off mirror balls hung from the ceiling. Two beams projected on the back wall changed shapes and danced with each other, then spread into the audience. The three-dimensional effect meant you didn’t just see the show, you were in it as well. Like the Busby Berkeley films of the ’30s. EWF and BOC’s shows may not have a lot to do with music any more, but they sure make for great entertainment…