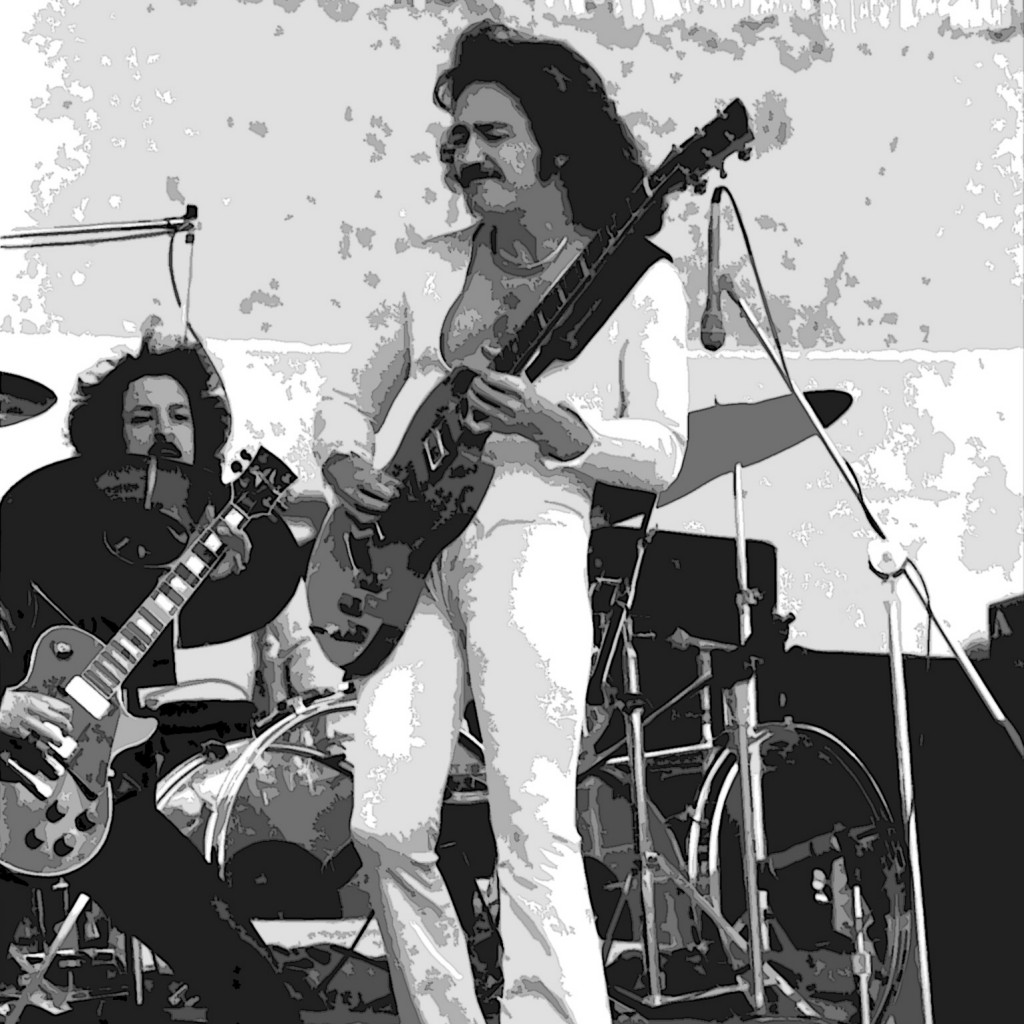 BLUE OYSTER CULT ROCKING OUT AT THE DAY ON THE GREEN IN OAKLAND, CA. ON JUNE 6, 1976. PHOTO BY BEN UPHAM.

The Blue Oyster Cult and Black Oak invaded Memorial Coliseum last night in the second sold out concert in a week and proved why they’re touted as two of America’s most improved bands.
Black Oak, with four new members but led by the inimitable Jim “Dandy” Mangrum, took the stage first and motored through an impressive 10-song set which displayed the best of both its worlds. Previously regarded as the worlds foremost “raunch and roll” band, Black Oak is now a tight, straight forward band with as much or more finesse as any other high-energy act around. Mangrum and guitarist Jimmy Henderson have surrounded themselves with four of Memphis better musicians and the rise in musical quality is almost amazing.
New guitarists Jack Holder and Greg Reding blend right in with Henderson, swapping leads and fighting guitar duels, while the new rhythm section of bassist Andy Tanas and drummer Joel Williams build a rock-steady platform on which the music is built. During the set, Black Oak proved they could still rock with anyone, especially on some of its older songs like “Great Balls of Fire” and “Hot And Nasty,” which is exactly as its title suggests.
But the truly impressive part of Black Oak’s snow is the brand new material found on its latest album, “Race With The Devil.” Throughout the evening, Black Oak played five of the eight songs on the album, all with a mixture of flair and Southern-fried energy. The new, improved Black Oak sounds lean mean and hungry. All the fat has been trimmed away leaving a tight, heady outfit with a new direction and some straightforward ideas on how to get there. Basically, the reason the old band was dissolved in favor of this new one is that its members were getting complacent about putting their hearts into the music and Mangrum just couldn’t live with that. So it was onward and upward and if last night’s show was any indication of what Black Oak is now capable of, the sky’s the limit.
The Blue Oyster Cult hit town with a brand new album and one of rock’s finest light shows, both of which were fairly impressive last night. The Cult has also undergone some musical direction changes recently. Though the music was softened up a bit for “Agents Of Fortune ” the new material is a cross between this softness and the old blitz-rock of earlier days.
But strangely enough, the highlights of BOC’s set were the old standards. The group played three songs from its very first album, including the opener, “Stairway To The Stars” and the murderous “Cities On Flame,” which featured some lightning from lead guitarist Donald “Buck Dharma” Roeser. The third oldie, “Then Came The Last Days May,” featuring an extended guitar solo, revealed the first major operation of the Cult’s infamous laser light show. As the sharp green laser beams reflected off strategically located mirror balls, the Cult got hotter and hotter, culminating in three monster songs which made a good show almost great. The thumping “Godzilla” featured more extended guitar work and long drum solo by Albert Bouchard made worthwhile by the lasers and strobes. Albert teamed with brother Joe Bouchard on bass to power the group through “Summer Of Love” into a searing, lasered, strobed firebombed climax of “Born To Be Wild.”
BOC returned for an encore of “Dominance And Submission” but didn’t totally satisfy until playing “Don’t Fear The Reaper”, it’s number one single of 1976. The Cult’s light show was impressive and the music itself isn’t bad, but the major complaints against the band remained valid last night. They can get a littler boring by extending things too long at times, and they have no stage show at all. There really isn’t even much energy flowing up there. They were good no doubt about that, but with a little work this show could be one of the best.

CLICK THE LINKS BELOW TO SEE BLUE OYSTER CULT PHOTOS: