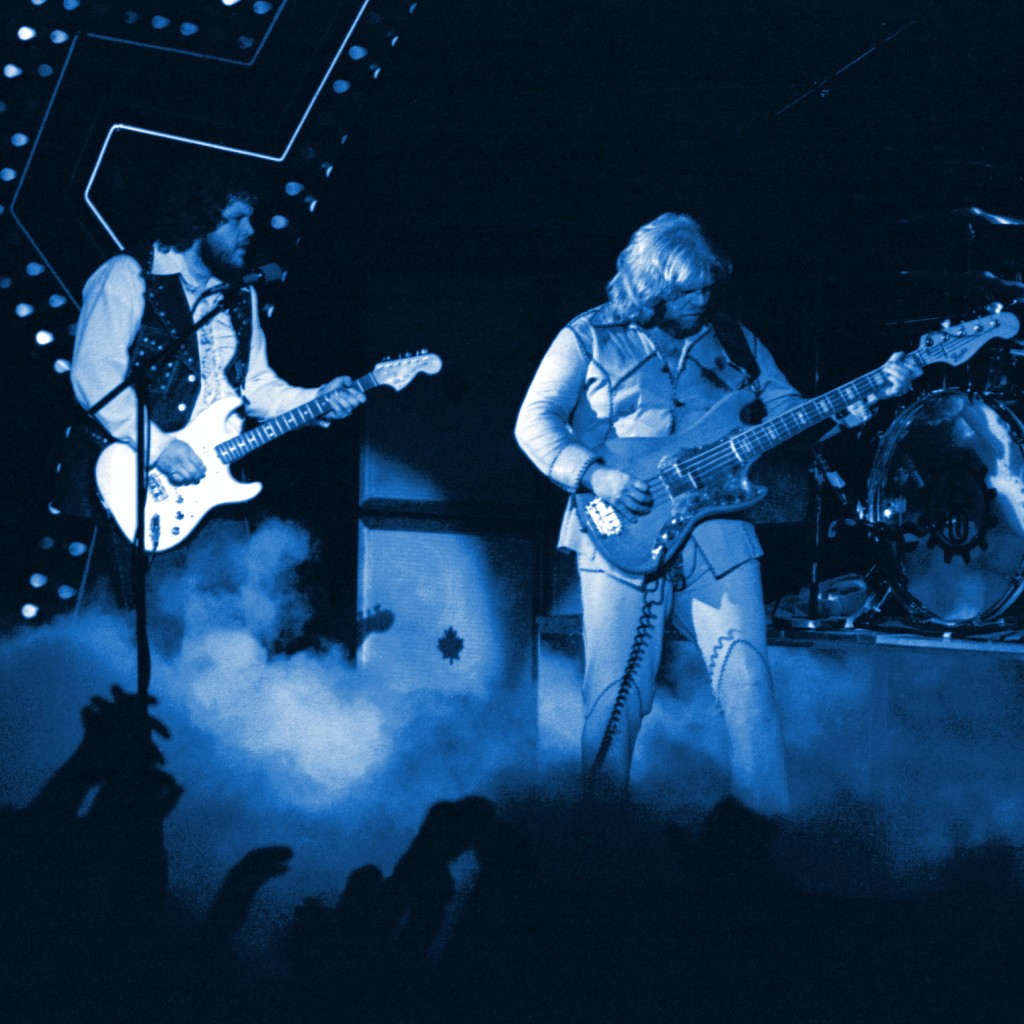 Bachman-Turner Overdrive distributed 4 1/2 pound marble paperweights to the press to get across the
message: We’re heavy, man. They are heavy — as in leaden and loud. The Canadian-based hard rock group’s performance at the Cow Palace last week was an assembly line showcase of the BTO experience from beginning
to end: lots of academic riffs, plenty of lumbering body movement and a red and white flashing logo behind
them beaming the image into the brain in case people forgot who they came to see. Bachman-Turner Overdrive. It sounds almost institutional. But consider the case of its leader, guitarist Randy Bachman.
Once head songwriter for Winnepeg’s The Guess Who, a middle-of-the-road rock band who had success but” lost it, Bachman is the recipient of a rare second chance in the pop music business. BTO does not play tip its tour individual personalities. It uses the logo for identification—a machine-age symbol that says it (or them. It’s an engine flywheel with the intials BTO stacked on top of each other on the innermost cog, a maple leaf inset signifying Canada.

“Rock is my life,” this is my song,” Randy Bachman sang and no doubt meant in a number about the ups and
downs of playing in a band, like the paperweight ( a 4 1/2 pound block with the BTO logo in raised gray steel), the heftiness of two of the members and the nature of the songs, BTO is an exercise in rock marketing. BTO has turned its brashness into a selling point. The bigger the better the bolder, that’s BTO.

During the hour they were on stage, the foursome (Randy Bachman on lead guitar, Fred Turner on bass and lead vocals, Robbie Bachman on drums and Blair Thornton on rhythm guitar) gave the near capacity crowd what it had turned out in the rain to hear heavy party music with an occasional catchy hook. No, BTO is not untalented. They may borrow a little here and there, but they put together some crowd pleasers like “Let It Ride,” “You ‘Ain’t Seen Nothin’ Yet” and “Takin’Care of Business. ”

Before the concert, drummer Robbie Bachman and guitarist Blair Thornton expressed some awe as to how they got where they are and lots of determination to stay. Last year Bachman-Turner Overdrive was a second billed act. Riding the crest of big record sales, the group is now a headlines Thornton, who strummed
his guitar through the whole conversation, said he felt BTO was filling a niche other hard rock groups had given up. “We’re staying right where we want to be at the moment, which is where those groups were and are no longer,” Thornton said. “Who knows why we’re as big as we are. When you’re this close to it,
you really don’t know sometimes.”

Robbie Bachman was more concise. “We blended English hard rock with a hook and made it more commercial. It’s also determination, the hope and dream of-always becoming (I don’t know what you want to call it . . .) a rock star? It’s fulfillment rather than a shock to me.” How did Randy Bachman change his style so drastically from the melodic Guess Who song •”These Eyes,” “No Time” and “Undun”) to the crunching new strains? “It’s not Randy, but the group behind him,” said his brother. “With Brave Belt
(the country-rock group between the Guess Who and BTO) we realized that people got up and danced better to
hard rock stuff, so that’s where we headed and forgot about the country. I always did like the heavy music. It’s the easiest to play.” My whole life is very hyper and speedy.”