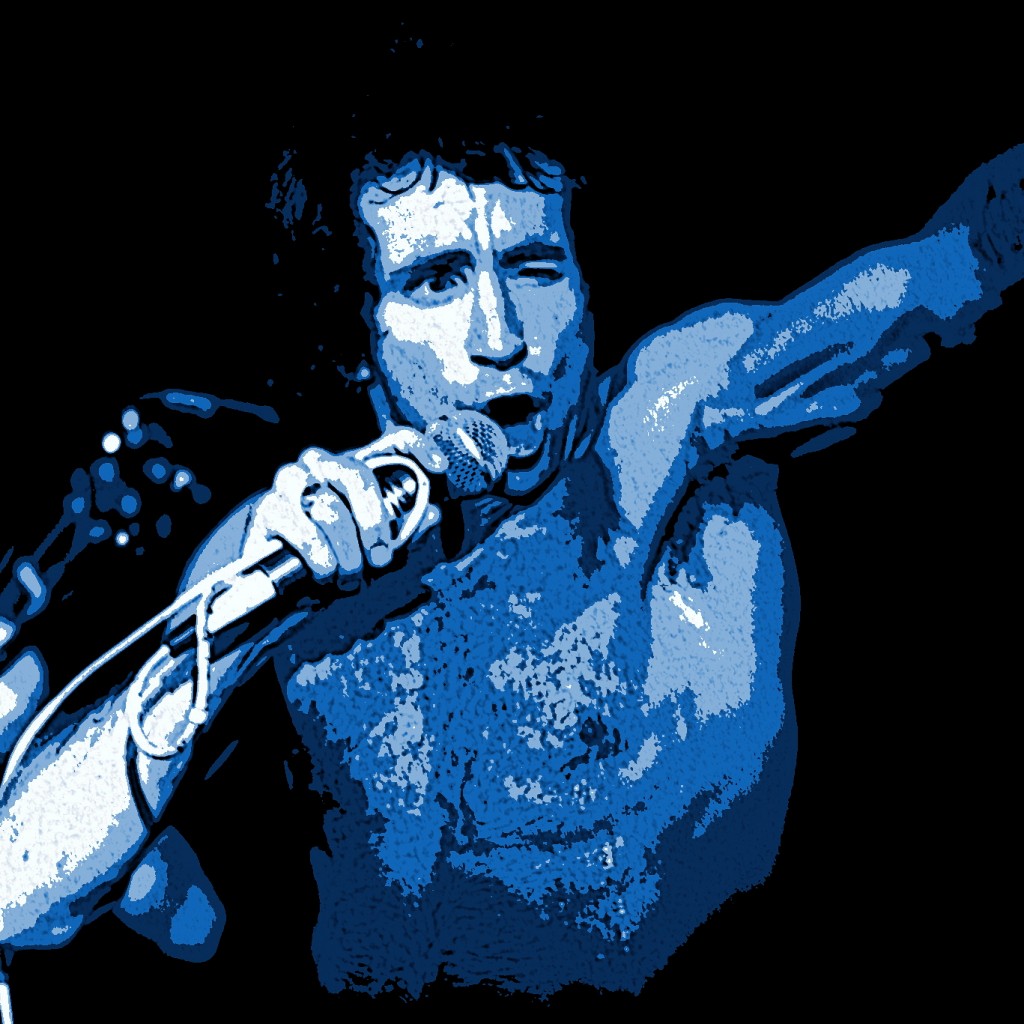 CLICK ON THE LINKS BELOW TO SEE MORE AC/DC PHOTOS:
SPOKANE 7-26-78
and
ARTWORK BY BEN UPHAM III

Some things never change, and AC/DC seems to be one of them. Sure, there have been some personnel changes over the last 16 years, the most notable being singer Brian Johnson, who was added after original vocalist Bon Scott drank himself to death in 1980. It’s, also true that the band has moved up in the world since it first began to raise a ruckus in the seedy pubs of Sydney, Australia’s King’s Cross district. These days, AC/DC is strictly an arena act, playing to packed houses across the globe. Still, the important stuff — the band’s sound and sensibility — hasn’t changed a whit. AC/DC’s songs have always been blunt edged and bone simple, specializing in hypersonic vocals and ear crushing guitar.

It’s not the fanciest way to rock and roll, but it’s efficient. That’s one reason the band never put much stock in virtuosity. “Even in the old days, we always put atmosphere before technique,” says guitarist Angus Young, speaking over the phone from his record company’s New York offices. “You can play a great song note perfect, but it might not have that spark.”
AC/DC, though, spits sparks like a downed power line. That’s one reason its music has been so enduring, and that’s as true of oldies like “Dirty Deeds Done Dirt Cheap” and “Highway to Hell” as it is off the new Top-10 album, “The Razors Edge.” “Kinda reassures your faith in rock ‘n’ roll music,” says Young, laughing.
Then again, AC/DC has always been a traditionalist’s hard-rock band. For one thing, the band hasn’t changed its image a bit,and looks today pretty much as it did a decade ago. Young, for instance, still hits the stage wearing a schoolboy’s jacket and short pants. “The shorts and that whole persona, that’s always been me from the start,” he says. “I mean, some nights it does get a bit cold. If you’re up there playing out there in Finland and you’re in the middle of winter, it can get a little chilly. But I think I would feel strange playing without them.”
Clothes aside, though, Young reckons that what AC/DC’s ongoing success really means is simply that rock and roll is alive and well. “I mean, I used to get annoyed years ago when you’d hear people like David Bowie go, ‘Ahh, rock music’s dead.’ I’d think, ‘Well, it might be dead for you.’ But I could never remember him playing a rock ‘n’ roll song.” Angus Young AC/DC, however, has never played anything but. Young attributes part of the band’s devotion to basic rock and roll to its early days in Sydney. “I mean, a lot of those areas we played were rough areas,” he says. “If you played ’em a slow song, it pretty much meant there might be some trouble in the audience, y’know? So we used to try and keep it fast and furious.”
AC/DC Is also a hard-working band and owes much of its reputation to its near-incessant touring in the late ’70s. Although its devotion to roadwork is now seen as proof that a band could literally play its way onto the charts, Young says the real reason AC/DC kept crisscrossing the country was that there was simply no other way to get heard back then. “Really, when we first came here, in ’77, the rock music on radio was pretty non-existent,” he says. “I think there were maybe five or six stations, in the entire country that were committed to playing rock and roll, and the rest of the stations were pretty much into this disco-type thing, y’know? So we virtually had to play every place.”
Naturally, some of that reputation stems from showmanship, but even there, AC/DC has stuck with the tried-and-true. That’s not to say the band is stuck in a rut, exactly; as Young puts it, “We always try to look for something a bit different.” But some things have taken on the status of ritual, as when the guitarist drops his shorts midway through the show to moon his audience (something that used to shock parents, but now seems almost quaint). One thing Young won’t do, however, is waste his listeners’ time with flashy guitar solos.
“I’ve never really been a follower of that I’ve-got-22-frets-and-I’m-gonna-use-’em-all school,” he says, laughing. “A solo has to fit the song. If you’re playing a slow song, I mean, now and again it’s worth zooming up and down the fret board. As my brother, George, used to say, ‘Keep it exciting, Angus.’ “But I think my sister-in-law said it best. She said, ‘Hey, you can practice at home.”

Guitarist in a schoolboy’s uniform…

While leather and chains are the requisite attire in most metal bands, AC/DC still stands apart for Young’s insistence on wearing shorts on stage. “Where I grew up in Australia, we had to wear a school uniform with the shorts and the blazer — basically the same as the English public school — with the cap,” he said, explaining that bit of stage dressing. “And I used to run home from school, dive in the door, grab me guitar and run out the door before my mother could catch me and say, ‘You’ve got to go to the shops.’ “So when my brother was forming AC/DC, my sister said, ‘Why don’t you leave your school uniform on? It will give people something to look at and talk about.’
“And it did, it worked. Even if people hated us, they always remembered, ‘Hey, they’ve got this little guy who runs around like a maniac with a school suit on.'” Of course, it’s even weirder that it’s a 31-yearold little guy who runs around like a maniac with a school suit on. But Young added: “It’s got my school a great reputation. It went from the third best in the state to the third worst, all in one fell swoop, which I was mighty proud of.” And something about the costume — and the guitar — brings out an energized Angus Young. “I’m pretty quiet offstage,” he said. “I’m probably probably the opposite of what I am .on stage. So it helps for some reason. When I put it on and get the guitar in my hand, it makes me feel extroverted.” EXTROVERTED for sure. Young is known for mooning his audiences. Asked whether he’ll moon the audience on this tour, he says, “Not really. I used to. It started when we were playing the Reading Festival in Britain, open air. When we started playing, some girl, really built, walked across the front. The whole audience was following her. My brother Malcolm said, ‘You better do something quick to get their attention back.’ So I mooned them.” Young’s exercise regimen to keep up his energetic stage show?
“I smoke 40 cigarettes a day. “You’re laughing, but it’s true. I’m a chain smoker. My brother’s got a theory. He reckons being on stage is the only time Angus doesn’t have a cigarette in his mouth, so he goes through this nicotine withdrawal.”
Leave the tough training and 5-mile runs to Mick Jagger and Bruce Springsteen. “I was never a great runner or very athletic,” Young said, shrugging. “But for some reason, when I’ve got the guitar on, it seems to give me this energy.” Maybe it’s not grounded right. This is a band, after all, named after electric current.

CLICK THE LINKS BELOW TO SEE AC/DC PHOTOS:
SPOKANE 7-26-78
and
ARTWORK BY BEN UPHAM III